What We Can Learn by Measuring Density

Determining an object’s density tell us a lot about it. What can we learn from density?

Sometimes we use density to figure out the type of material. For example, you have a piece of wood but don’t know whether it’s oak or pine. Wood from the two trees have different densities, so knowing its density can tell you which type of wood.

Density can also determine a material’s purity: if pure water’s density is 0.9998395 g/ml at 4.0° Celsius (39.2° Fahrenheit), any other density reading for a sample would tell you that it contains impurities.

How Do We Measure Density?

We can calculate an object's density (represented by the Greek letter ρ) by comparing its mass (M) to its volume (V) with the formula ρ = M ÷ V. The result is described as mass per unit volume, i.e., grams per milliliter. Temperature can affect the result when determining the density of liquids, so temperature is often listed as well.

There are several processes to measure density. The traditional method involves calculating the volume of the sample material and weighing it, before dividing the mass by the volume using the formula above. Because volume is sometimes difficult to determine, that method could lead to inaccuracies.

Today, we can determine density with a lab balance and a density kit. 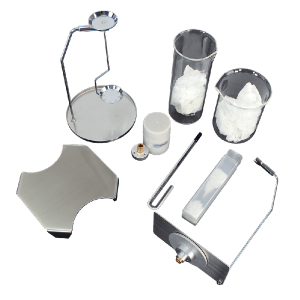 Most lab balances feature built-in software to measure density, so the addition of a density kit makes it much simpler to calculate than with the traditional method. Since the density kit permits testing of both solids and liquids, even samples with densities greater or less than that of water can be determined. The balance software calculates density using selectable references (such as water, ethanol or paraffin); many balances allow the user to enter the density of any reference liquid directly.

Why do we weigh an object in liquid to calculate its density? You need to first know the object’s volume before you can calculate its density. Most objects are irregularly shaped, so to figure out their volume, using Archimedes’ Principle you’re actually measuring their displacement within the known volume of the reference liquid.

Density kits are installed on the floor of the balance's enclosed weighing chamber, with the kit's beaker holding the reference liquid. The user selects the balance’s density application, weighs the solid sample in air using a sample cup on top of the stand, then again in the reference liquid using the sample cup suspended on the wire. The balance then calculates the sample’s density.

Adam offers density kits for Equinox and Solis analytical and precision balances, as well kits as for 0.001g balances with 120mm and 160mm ø pan sizes and 0.0001g balances with 90mm ø pan sizes. The kits typically include a thermometer, a holder to measure the temperature of the liquid being used, a beaker, a beaker holder and a replacement pan assembly to measure the sample in the liquid or in the air.

Determining the Density of Liquids

To determine the density of liquids, you would place the glass float supplied with the density kit on the weighing pan when the balance asks for “Air Weight.” Once the balance has recorded the result, it will display something like “Liquid Weight.” Add the liquid to the beaker (either a predetermined amount or fill a graduated flask to the desired level). Once the liquid is stable, submerge the glass float. The balance will calculate the liquid’s density and display it.

Because temperature can affect the density, you may also use a thermometer to note the temperature. While you might not expect the difference to be that significant, the density of ice, for example, is about nine percent less than that of liquid water.

The addition of a weigh-below hook allows larger samples that may not fit in the chamber to be weighed below the balance. It should be noted that while the sample may be larger than what the chamber allows, the balance’s capacity remains the same. Questions about how Adam can help you determine density? Contact us to learn more!