Nowadays it’s quite common for balances (and even some scales) to feature touch screens. But is it worth it? Should you spend the extra money on a touch screen? In this post, we’ll take a look at the pros and cons of touch screens on balances and scales.

What is a touch screen?

There are a few systems that make it possible to operate a device by touch. We’re going to focus on capacitive displays since they’re what we use in our balances. Capacitive touch screens are very popular since, unlike resistive touch screens, they do not need pressure to work, so they last longer. For example, you could press the screen of a POS machine with your finger, a pen or a similar object, but a capacitive touch screen only works with finger or a stylus, which conducts the finger’s electrical charge to the screen. That’s why you can use a stylus but not something like a pen. Another reason they’re so popular is the clarity of the images compared to a resistive touch screen. This is essential for devices like phones and tablets, but also for lab balances, since they must clearly display results, icons and menus to ensure there is no confusion. Capacitive touch screens are also more resistant to wear and tear such as grease, dust or water. As long as they’re kept clean and away from excessive amounts of static electricity, the capacitive touch screen will not fade over time.

How does a touch screen work?

Essentially, a transparent electrode layer is placed on top of a glass panel, then covered by a thin protective layer. The actual screen is underneath these layers. When a finger touches the screen, the electrical charges are transferred from the finger to the screen. Sensors in the layer detect the changes in electrical charges, and the location that was touched. The electronics then process the touch and location to determine what the device should do in response to the touch.

Since a “touch screen” is really a few layers above the actual display, a touch screen display can be combined with LCD technology. 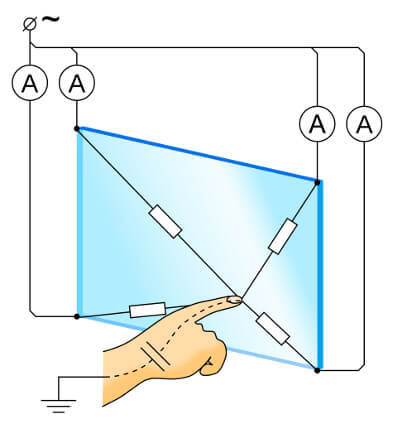 When is a touch screen worth it?

You’ll often see touchscreens on analytical and semi-micro lab balances. That’s not a coincidence. Usually, these balances have a lot of features and functions, and a touch screen just makes more sense to navigate the many different options available to really customize testing and measurements. Testing and experiments can be long and complex, so it’s essential to make the measuring process as intuitive as possible. That means clear, informative menus and prompts. Because using a touch screen is relatively intuitive, there is usually less training time to become familiar with the balance, which can also be useful in busy lab with students or interns who have little time to train. It’s also assumed that conditions in the lab will be optimal and that the balance will be well-taken care of, so it’s less likely that the touch screen will be damaged. Just make sure that the screen will work even with gloved hands!

If you’re using precision models for field applications, you might prefer a regular graphic display that uses buttons. Sometimes cost is also a factor. It’s mostly about convenience, and whether you’re willing to pay the price for it.

What is an LCD?

Adam scales and balances use LCD displays, so they’re the ones we’ll focus on in this post. “LCD” stands for Liquid Crystal Display. The technology has become standard since it consumes less power than LED or CRT displays, and takes much less space, resulting in slimmer devices. LCD is starting to be replaced by OLED technology, but OLED is still much more expensive, and tends to suffer from burn in (permanent image retention) after a while, which is problematic in a TV and catastrophic in lab instruments. 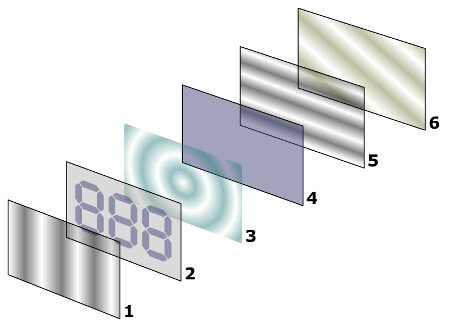 How does LCD work?

A display (whether it’s LCD, OLED or anything else) works by switching millions of pixels (the higher the pixel count, the higher the resolution) on and off, and changing their colors to create various combination to form the images we see. LCDs feature a backlight to illuminate the pixels, which are switched on and off electronically by thin film transistors and capacitors. The layer containing the pixels is sandwiched between two polarizing (meaning only half the light passes through) glass filters, which contain liquid crystals (they flow like a liquid, but the molecules are ordered like crystals) that rotate polarized light to change the pixel’s color when an electrical charge is applied to them.

When is it better to use buttons?

Rigorous environments can damage equipment quickly, so touch screens don’t fare too well in heavy-duty industrial areas  or other harsh environments. Furthermore, people often have to wear heavy gloves and other protective equipment that can hinder touch screens. For highly demanding environments with a lot of dust, humidity, water or spills, it’s better to have a scale with a rugged indicator and a sealed keypad to make sure the scale lasts longer without needing repairs.

Touch screens can be expensive, so sometimes they’re more of a premium feature than a necessity. A compact scale or a retail scales don’t need touch screens to be functional. It’s just not worth the extra cost.  If all that is needed is basic weighing, there is no need to invest in a balance loaded with features that will not be used. 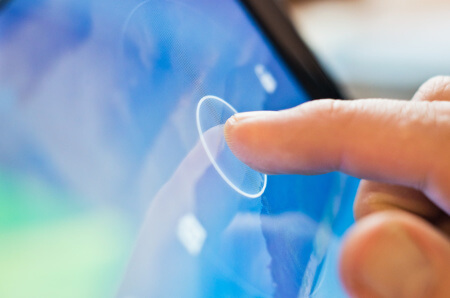 While not having a touch screen is cheaper, the downside is that you usually have to learn to use the buttons to navigate through the menus. It’s quite common for scales to have buttons with multiple functions. Luckily, Adam scales feature color-coded keys with symbols on them to make navigation more intuitive. Be sure to consult the manual to get familiar with keys and what they do.