“Formulating” the Uses of Your Balance’s Formulation Function

Scales and balances can be helpful to ensure you’re adding the correct amount of ingredients to your recipes and formulations or for scaling up existing formulations. But rather than weighing just one ingredient at a time, what if there was a better, more efficient way? That’s where the scale’s formulation function comes in.

Also called recipe calculation, formulation is a selectable weighing mode available on more advanced precision and analytical balances. It allows the user to store, add and calculate the weights of multiple ingredients to provide a total weight value. The key to a successful formulation is that it must be repeatable, which is why it’s critical to accurately weigh each ingredient or component and ensure the proper ratio of each within the formulation.

The process itself involves repeated testing with ingredients to achieve the desired results, including properties like taste, texture, color, shelf-life or dosage.

Where Would You Use the Formulation Function?

Formulation is helpful in a wide variety of industries and settings. To name just a few, these include pharmaceutical labs, research and development labs, new product development (like cosmetics and hair dyes), food production, beer brewing, paint mixing and even mixing ink for screen printing. 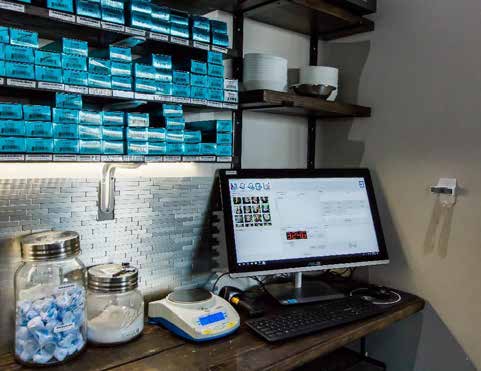 Smaller labs may rely on handwritten records to retain formulae, noting ingredients, weights and other properties. Transcription errors or even poor handwriting may cause incorrect values to be recorded, resulting in unusable materials and wasted time. A balance that stores formulations or even connecting the weighing device to a PC with LIMS software greatly reduces the risk of error, as well as provides documentation and traceability.

Because the ratios of a formula can be exacting, it’s extremely important that the scale or balance used for formulation weighs the ingredients accurately to maintain the correct proportions. Failure to remain true to the formula’s ratios could cause results ranging from a useless or inferior product to possibly endangering a consumer’s health.

At the development stage, the process of scaling up the formulation is used to create and perfect the recipe itself for mass production. Some weighing devices, like Equinox and Solis, permit the user to scale up the compound from the original formulation values without having to manually recalculate the measurements. The upscaling, of course, would be limited to the balance or scale’s maximum capacity.

Later, during manufacturing, the formulation is scaled-up even further to create the quantities needed for consumers (for example, a recipe created in a test kitchen versus the product created to be sold in a retail store). The larger quantities used for manufacturing demand larger weighing devices, like industrial balances.

When measuring each component of a formulation, many balances allow the user to select a percentage tolerance that an ingredient may deviate by without affecting the formulation’s integrity.

Looking for more information about how Adam Equipment can help you with your formulation needs? Contact us!